The majority of us modern-day humans have been indoctrinated with the cultural conviction that we are superior to everything else that exists. Most of us unquestioningly believe that not just our survival, but our day-to-day comfort and narrowly defined, short-term well-being, comprise the most important agenda being played out on earth. We don’t have to look far to see what a mess this has created, with the land, waters and air being polluted all over the planet, wild habitats shrinking, plant and animal species going extinct, and indigenous human communities dying out. We are literally killing our ground out from under us. Through deigning ourselves superior, we have made ourselves hostile and aggressive in groups, and lonely, disconnected and sad as individuals. We are trampling our souls, and depriving ourselves of vast levels of spiritual understanding and deepening that are our birthright.

Here is a simple yet powerful way we can begin to change. We can stop calling ourselves people! There are many peoples on this earth—tree people, bird people, stone people, to name just a few. The natural world’s beings, both material and spiritual, deserve the status of “people” as much as we humans do. Denying this truth makes us separate and superior right from the start. Who wouldn’t place the well-being of “people” over the well-being of a mere forest or river, prairie dog or minnow or condor? This way of thinking is what has led to our current tragic situation, where jobs—which are needed so that “people” can make a “living”—are considered infinitely more important than the continuance, much less the flourishing, of Gaia’s natural eco-systems large and small.

So today I invite us all to take a simple first step toward a more fulfilling and nourishing life on earth—by training ourselves, over and over, not to think of ourselves as “people.” Human people, yes, but not the only people. We are merely one people, among an infinite variety of other peoples who have as much inherent value as we do. We must learn to reflexively grant personhood to all of Gaia’s beings and systems, her animals and plants, oceans and mountains and forests. It may take a while—we have been affected deeply by the currently-dominant culture’s ways of thinking and perceiving. But this tiny act of rebellion can lead, little by little, to radical changes deep within us and in all our relationships with all kinds of people.

We are not the only people inhabiting Gaia’s vast life-web. When we acknowledge this, and live it every day, we become the most we can be: whole, human people.

When I was 9 or 10, my dad and I often played spirited games of poker in the evening. We enlivened most games by letting the dealer declare certain cards to be “wild cards.” If you got a wild card, … END_OF_DOCUMENT_TOKEN_TO_BE_REPLACED

Here we are again, in the darkest time of the year. After our holiday celebrations (most of them based on the land-connected traditions of our ancestors), now we settle into the rhythm of short days, … END_OF_DOCUMENT_TOKEN_TO_BE_REPLACED

On a recent winter’s day, I watched a ruby-crowned kinglet take a bath in an icy stream. The stream was almost totally frozen over, but beneath the overhanging branches of a spruce tree, the water … END_OF_DOCUMENT_TOKEN_TO_BE_REPLACED 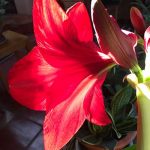 One of my favorite autumn rituals is to go to the nursery in October and buy amaryllis bulbs. This year I splurged and got 9 of them! I pot each bulb, upper part uncovered, place it near the … END_OF_DOCUMENT_TOKEN_TO_BE_REPLACED

The heart is sacred. Gaia’s lands and waters and plants and creatures are sacred. We are sacred. All existence on all dimensions shares a connection with the sacred, vital life of Mother Earth, of … END_OF_DOCUMENT_TOKEN_TO_BE_REPLACED